Winter biking continues to fascinate me. Fortunately there is no shortage of fashionable ladies making it happen in snowy climes. I am in awe. Via Eleanor's As a dedicated vintage-picker, this is my dream weekend getaway. All the best stuff is in small towns, don't you know? Via The New York Times

Professional cheerleaders are beautiful, athletic, and hardworking. They are also shockingly underpaid. Fortunately these so-called sweater monkeys are fighting back.Via The Atlantic

Even though I'm working on a handbag, I found myself completely identifying with the unexpected struggles of this budding plus-size clothing designer. Via xoJane

I'm also a devotee of that big vintage shop in the sky cloud. But it's not heaven, it's eBay. Here are 15 tips for buying clothes on the auction behemoth. Via Beauty Valued

I've never been a fan of Coach, the ubiquitous American handbag label. But I'm super-excited about the brand's revamp under designer Stuart Vevers. Via Bag Snob

Just by reading this post, I feel like I'm on my way to joining the ranks of Isabella Blow, Grace Coddington, Carine Roitfeld, and Jane Birkin. Okay, maybe not, but I'm ultra-inspired to develop my signature look with this in-depth how-to. Via Into Mind

Lying Panther doesn't even use a real picture of himself on his online dating Amazon profile. Via Amazon.com Now that you have a charming vintage (or vintage-inspired) bicycle, it's time to accessorize. Remember, bikes aren't just for looking sexy. You can also use one for running errands and transporting chocolate bars.

Panniers and saddle bags take the load off your back and put it onto your bike. Your bike chic outfit stays fresher since you're not sweating under a heavy messenger bag. 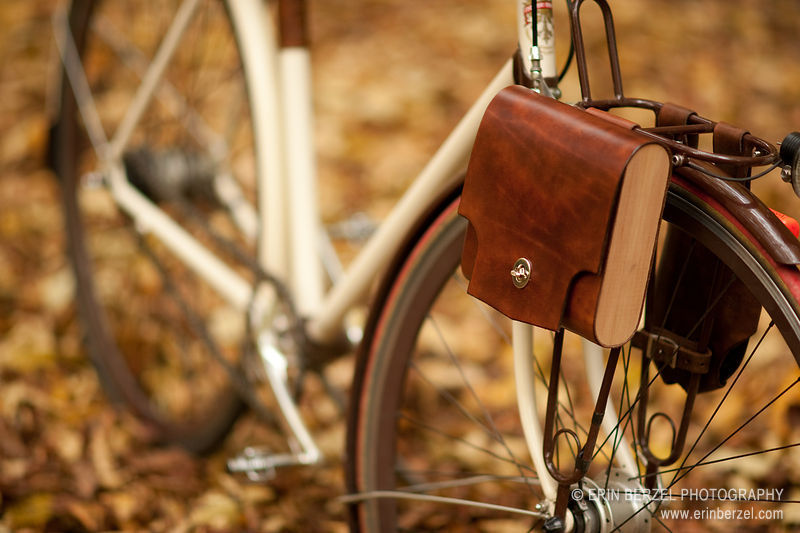 And how cute is this barrel-shaped saddlebag? Not only does leather help you carry things on your bike, it also helps you carry your bike.

I have a persistent bruise on my right shoulder from carrying my bike up four flights of stairs so I can take selfies on the roof. This bike portage strap would ease the strain and give my princess-like complexion a chance to unbruise. Walnut's claim to fame is the bicycle can cage. It's the perfect gift for a noob biker who has everything.

Actually a lot of experienced rider have yet to master keeping one hand on the bars and the other around a PBR.

And for those rare times when you're biking to the party (rather than in the party) bottle belts'll secure spare vino to your top tube. Fun fact: I lived in Italy for three and a half years. The first two I spent in Fashion School and for my last year and a half I worked as an assistant designer for a luxury handbag company. No, not this one or this one. This one. Don't laugh: those are some of my designs in that horrible flash slide show.

Speaking of which, most of the Italian design I saw during my time abroad was tacky as poop.  Seriously, ordinary people were physically incapable of wearing a pair of jeans unless a giant pair of angel wings were appliquéd over the butt and thighs.

Have you ever seen those Ed Hardy, rhinestoned skull t-shirts and wondered who was actually wearing them? The answer is 50 year old Italian men. Straight men with, like, actual mistresses and, um, cars. One of our leather reps used to dress like this all the time. (These men don't buy the shirts themselves though, their moms still pick out all their clothes.)

It wasn't until I had been back in San Francisco for a couple of years that I discovered Umberto Dei, an Italian manufacturer that has been crafting exquisite bicycles, components, and accessories for over 100 years. It happened in the year 1896. The Lumiere brothers had just invented cinematography and Guglielmo Marconi had created the wireless telephone when a little artisan, fond of cycling and extremely meticulous, made his first series of bicycles. His name was Umberto Dei.

That was the beginning of a marvellous adventure that led him to create a collection of bicycles which were considered among the best in the world. Their level of quality and perfection was so high that the brand Dei became world-known: everybody longed to have a Dei bicycle and win by riding it.

Umberto himself had a leading role in the track World Championships which was held in Berlin in 1901. The Dei racing bicycles won everywhere and were on top of the scene for nearly half a century, receiving many honours in the most important cycle tracks of the world.

As Copenhagenize.com pointed out in a post from four years ago, there wasn't a lot of information about these bikes on the Internets, which is still true today. Good investigative journalists that they are, they managed to unearth the above quote from a 1988 catalog (printed on real paper, presumably). But I didn't fall in love until I saw Umberto Dei's gorgeously simple leather saddle bags and panniers. I sat there slack-jawed and drooling onto my keyboard, soaking up their exquisite detailing, minimal trim, and my own saliva.